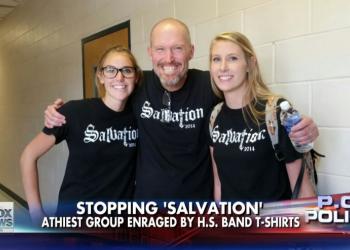 An Ohio High School, Licking Valley, has a a marching band in hot water with “crabby atheists” because of the single word salvation. The high school marching band played a song called “Salvation is Created” and printed the word salvation unto their band shirts. The Freedom From Religion Foundation complained because the salvation is a “religious message”. This is apart from the fact that salvation can be put into different contexts which aren’t religious such as the salvation by the Russian revolution.